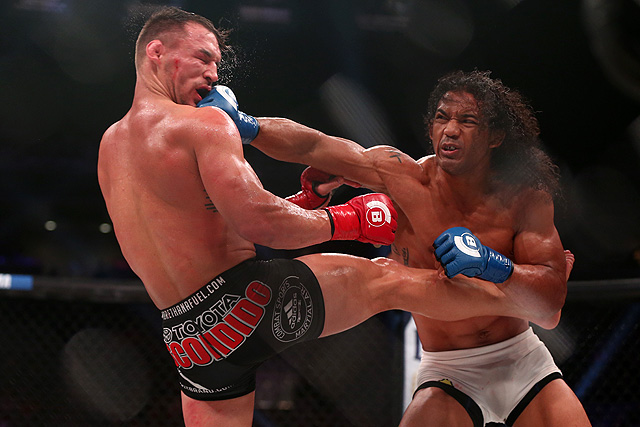 Reputations are on the line at Bellator 183 as Benson Henderson vows a return to form while Patricky “Pitbull” looks for his biggest career victory.

In a rare twist, this Saturday will be owned by Bellator while the more renowned Octagon will be in action on Friday night.  To take advantage, Bellator is putting on it’s most stacked event since their debut in Madison Square Garden with a night headlined by Benson “Smooth” Henderson against Patricky “Pitbull” Freire.

For Henderson, the fight is his first since challenging Michael Chandler for the lightweight title in November last year.  Since then, he has taken time to surgically repair a torn ACL that he has been competing with for some time.  He has promised a return to form on Saturday night, and it’s what his career desperately needs at this stage.

Since entering Bellator in 2016, he has gone only 1-2.  He’s dropped title fights to both Andrey Koreshkov and Chandler.  His lone victory was against the younger “Pitbull” brother, Patricio, and it didn’t come without controversy.  Many observers had Henderson losing the fight, however Freire called off the bout in the middle of the second round.  After the fight, it was found that Freire had suffered a broken shin in the first round and had continued fighting for several minutes before succumbing to the pain.

Considering that Henderson was once regarded as the top lightweight in the world, the run has been uninspiring to say the least.  In 2013, he was one victory away from breaking the record set by BJ Penn for consecutive title defenses in the UFC lightweight division.  Instead, he was stunned by Anthony Pettis and has struggled to regain consistent form since.  He went 2-2 in his following outings, virtually falling out of the rankings in a division as loaded as 155.  He left the UFC in free agency following a victory over Jorge Masvidal at welterweight, generating a lot of interest that he could become a two-division champion in Bellator.

Such talk has slowed and this next fight could well determine Henderson’s status going forward.  A victory reignites his title chances, likely awaiting the winner of the expected rematch between Brent Primus and Michael Chandler.  A loss would put him at 1-3 and likely write him off from returning to the elite level.

Patricky “Pitbull” Freire is looking to secure his own statement victory by beating the former UFC champion.  He has fought the best opposition that Bellator has had to offer, but lost in his most important bouts.  He has two losses to Chandler and one to Eddie Alvarez,  each in stunning fashion.  Recently, he bounced back from a first round KO loss to Chandler for the title by stopping veteran Josh Thompson in February.  He is 4-3 in the last three years, and his recent run has many considering him more of a journeyman despite his devastating skillset.

There is also the added factor of familial pride.  Although his brother had great success against Henderson, it was called a loss for the Freire’s as the younger “Pitbull” had to quit in the middle of the bout.  While Patricio has been vocal that he doesn’t need big brother fighting his battles, there will undoubtedly be a level of ego on the line when Patricky meets Henderson on Saturday night.

Stylistically, a healthy Henderson should have the tools to give Freire enough problems.  His explosive kicks, takedowns, and comfort in diversifying his skillset should allow him to keep the Bellator veteran on the defensive.  His biggest advantage will be on the mat and he should look to get the fight on the ground as early as possible.  To give him even more confidence in that area: “Pitbull” has been a professional since 2005 and only has two submission finishes in his MMA career.

Freire should look to replicate the strategy his younger brother had, pushing forward and not giving Henderson space for his kicks.  By putting Henderson against the fence, he also makes it difficult for the former UFC champion to shoot for a takedown.  The key from there will be to win the battle in the clinch as they work for under hooks, or picking Henderson apart with strikes on the fence.

The knockout power of “Pitbull” is obviously the x-factor, as he can change the complexion of any fight with a single shot.  For Henderson, there’s a point to prove that at 33 years old, he still has another noteworthy chapter to embark on his MMA career.  What makes this fight different?  This fight is likely to define the reputation of both men at this stage of their careers going forward.