Justin Linn makes his Bellator MMA debut on Saturday at Bellator 183, and he’s getting thrust right into the spotlight. Despite coming off two losses, Linn’s first bout for the promotion isn’t buried on the undercard, but instead will be a key part of the evening’s main card festivities. That’s because Linn (7-3) has been given the nod as the second opponent for wrestling phenom Aaron Pico. The bout is being contested at featherweight.

Pico made his MMA debut a few months back at Bellator NYC, and needless to go, it didn’t go as planned. He found himself quickly finished by Zach Freeman, who was happy to play spoiler in Pico’s big debut. There’s no question Linn, as Pico’s sophomore dance partner, would love to play spoiler as well, and he took the time to speak to Cageside Press about how the opportunity for the fight came about, his thoughts on Pico, and more.

So just how did the fight against Pico, one of the hottest prospects in Bellator history even after his shocking defeat, come to fruition?

“I had offers from Bellator multiple times, via my manager, but I turned them down just so I could reevaluate myself after my two losses” Linn told us. “Obviously after I’d lost my manager was like ‘hey man lets get back right back in there and get you some wins.’ So they offered me a couple guys from Bellator but I turned them down not because I thought I would lose, but because I wanted to showcase to the world how good I really am, and how good I really can become.”

Then came the Pico offer, and the rest, as they say, is history. It’s an opportunity few fighters get, not just as a fresh start in a new home, but to showcase his talents. Most importantly, it’s one Linn feels he’s more than up to.

“I’ve been fighting tough guys my whole career off camera. I fought three UFC fighters off camera, they [fans] never really saw it” he said of his career to date. “This is a great opportunity for me to show the people what I really can do. Even though I’m a 35’er and he’s a 55’er, I have no problem meeting in the middle to showcase my skills on a grand scale.”

So what did Linn take away from his opponent’s rather unsuccessful debut?

“People get caught, things like that, but what I seen from him, I feel like he comes straight in, he’s flat footed, he likes to swing kind of wide, too wide for me. I like to come straight down the pipe” Linn explained. “That’s all I’ve really seen, he got choked, but that doesn’t really mean anything, because he was rocked when he did get choked” he continued. “So I don’t really see him as weak in defense or things like that, because he was obviously stunned from the uppercut.”

As to how they match up, “technique wise, I stack up really well. In the striking department, I have great Mauy Thai, I have really good boxing.” What will give Linn the edge? “Just being more technical, I’m moving, keeping my feet moving, using my boxing, jiu-jitsu is going to play a huge role if he wants to take me down. I’ve been doing jiu-jitsu for ten years, so I think my jiu-jitsu is superior to his wrestling, even though he’s been wrestling for so long.”

Pico pushed the pace in his first fight, and that’s something Linn doesn’t necessarily see happening. Not that it will bother him should Pico take a similar approach this time out. “I like to stay composed, take my time” in regards to fights, he told us. Still, “if he wants to push the pace, it’s probably going to end like his last fight.”

“If he comes out more tentative, and takes his time, he’ll probably do a lot better. But I’d prefer if it if he came straight out of the gate so we can get to work and see his mistakes early on.”

Linn’s mentality isn’t one of a fighter just going into the cage to go for the kill, however, so he doesn’t foresee any issues if Pico does hang back a bit. “I think of it more as defending myself when I get in there, not really going in there to kill or things like that” he said. “I think of it as ‘he’s coming at me, and I have to defend myself.'”

When it comes to training, Linn takes an equally unique approach. Though he definitely does his homework on opponents, “I focus on myself more than anybody” he told us. “When I train, I film myself so I can go back and study. I film myself sparring, I film myself hitting the bag. I pretty much film myself lifting weights. I just like to reevaluate myself every time I come back from the gym.”

That attention to detail is why Linn, who trains in his own private gym, isn’t all that worried about ring rust, despite having been out of action over a year.

Ultimately, Linn is hoping that it pays off — with a much wider audience than in the past. “It’s a huge opportunity. I’ve been fighting UFC fighters off camera, now it’s time to be on camera” the fighter said. “I’m sure a lot of people are going to be tuning in.”

And thankfully, “I can actually fight somebody that’s decent on TV now.”

Speaking of the extra exposure, Linn sees no pressure in performing on such a big show. “It’s all a positive. When i get out there, there’s no pressure. Anything that happens, it’s going to be all positive at the end of the night. Everything I do is a learning experience.”

“On a big show like that, you always grow and learn afterwards” he added, later saying that “I learned so much after my last fight. I’m a completely different fighter. I can only imagine, win or lose, what I’m going to learn after this.” 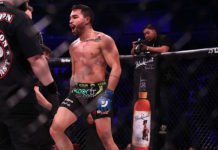 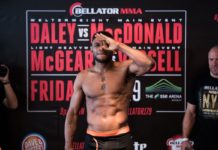 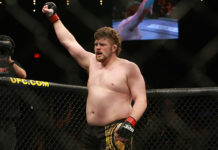