The co-main event of Friday night’s Bellator 182, live from the Turning Stone Resort Casino in Verona, New York saw Brennan Ward take on Fernando Gonzalez. The pair met in a 178lb catchweight bout which marked Ward’s first fight back since suffering a crushing flying knee KO against Paul Daley earlier this year at Bellator 170. With Ward walking out to a crushing metal walkout track, it felt like fireworks in the air prior to the bout.

With a touch of the gloves they were off, Ward immediately on the offensive. He’d eat a shot from Gonzalez coming in, but paid it no mind. Gonzalez threw a head kick that was blocked, and moments later Ward had Gonzalez on his back. Ward, working inside a closed guard, sneaked in some short punches to the side of the head while looking to posture up and improve position.

Back on the feet, Gonzalez would find a home for a kick to the body, but seemed wary of Ward’s power. He’d smartly circle out of harm’s way whenever possible, and use the fence to escape when necessary. Gonzalez would land another kick to the leg, but Ward seemed no worse for the wear.

The second round saw Ward pressing forward early. Stacking Gonzalez up against the fence ninety seconds in, he’d look to make something of a key takedown. Gonzalez, however, managed to explode back up, and they’d reset in the center of the cage. A high kick from Gonzalez whiffed; Ward would work his way forward with his jab and combos. With under a minute to go in round two, Ward would secure another key takedown, eating precious seconds off the clock while Gonzalez struggled to wall walk back up.

With Ward likely up two rounds, the third opened with Gonzalez in need of a finish. Ward would quickly find himself caught in a guillotine as Gonzalez pulled guard as he shot in, and just moments later, Gonzalez had the tap! What a comeback. 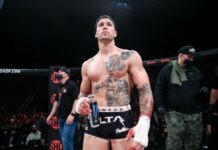 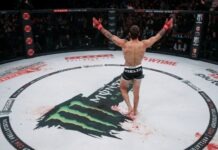