UFC color commentator Brian Stann, a former UFC and WEC veteran who captured the WEC light heavyweight championship, has announced his resignation as a broadcaster with the promotion. The ex-fighter, also a decorated military vet, has been considered one of the best color commentators in the business over the past few years. “The All-American” seemed like a lock to eventually replace Joe Rogan, who has been working a reduced schedule of late. Paired with Jon Anik, the duo put forth some of the better efforts on UFC Fight Night broadcasts on Fox Sports, and displayed excellent chemistry on air.

Stann’s ease in the booth was no doubt helped by his fighting background. His final bout came in the main event of UFC on Fuel TV 8 in March of 2013, where he lost via TKO to Wanderlei Silva. Not long after, he began lending his voice to UFC broadcasts. That debut came during the prelims of UFC 163 the very next month.

Instead of being one of the voices of the UFC, however, Stann is moving on to a business venture with a real estate firm, taking on a COO role, and pursuing an MBA in the process. Stann announced the news on his official Instagram account Monday. In a statement, he cited time with his family as the primary factor in his departure, and thanked FOX, Zuffa, and specifically broadcast partner Jon Anik.

I am announcing my departure from calling fights w/ the UFC. I have been offered an amazing leadership role with a fast growing Real Estate Firm and will be attending Northwestern (Kellogg) for my executive MBA this fall. Thank you to everyone for years of support, especially the athletes and coaches whom I love deeply. I will continue to be a huge MMA supporter and attend many events. Thank you to everyone from FOX and Zuffa who helped me so much in this journey. @jon_anik you are my brother and that will never change, and I cannot tell you how important your friendship has been to me. My wife @teressa_stann who has endured so much and supported me through war, fighting, and now this transition, I love forever and thank you so much. This move is to focus more on my family. I traveled 26 weekends last year for work while also working a full time job. My new role as a COO will be very difficult but still afford me my weekends with my wife and 3 children. Transition and change are a part of life and I am really excited to prove my worth to my new company and hopefully showcase the diverse skills military veterans and mixed martial artists possess. Thank you all.

The quest for a replacement may not take long, as the UFC has frequently used fighters like Dominick Cruz and Daniel Cormier on broadcasts. That said, Stann’s attention to detail and knack for always being prepared will be sorely missed. 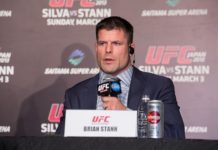 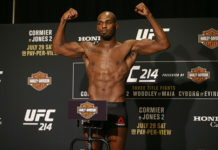