Featherweight Justin Lawrence got his start in professional MMA under Scott Coker’s Strikeforce promotion, and after stints in the UFC and RFA, found himself in Bellator as Coker took control of the ship. It’s kind of a full circle situation. Friday night at Bellator 181, Lawrence (9–4, 2-2 BMMA) looks to get back on track against Treston Thomison, and spoke to Cageside Press about his UFC past, Bellator 181, and avoiding the judges.

With timing being what it is, the discussion started with The Ultimate Fighter, which introduced many MMA fans to Lawrence. A veteran of season fifteen of the series, Lawrence finished James Krause to make it into the house, then KO’d Cristiano Marcello before falling to eventual winner Michael Chiesa. With Krause making it to the semi-finals of The Ultimate Fighter 25: Redemption, has Lawrence been watching, and is having that win over Krause something of a feather in his cap?

“No, I really haven’t” Lawrence said of watching the most recent season of the show, the finale of which aired live this past Friday. “It’s kind of one of those things, you know you’ve been there done that. I do know that at the level we’re at, the fight game is fairly small and everyone knows everybody. I did know that he was on there, and doing well. So best of luck to him. I definitely put him away fairly early when I did fight him; it was one of my most memorable fights.”

“At the end of the day, he’ll always remember me” he continued. “That fight in particular really changed my life, it put me into one of the biggest shows. It got my career going, I could actually fight full time instead of having to work a job or what not. Ever since then I never had a job, I really focused on myself and focused on my fighting career, which is what I wanted to do since I was little. So it’s definitely a feather in my cap.”

Now that Lawrence is with Bellator, getting asked back to TUF isn’t going to happen, but had he been in a position to participate in Redemption, or a season like it, would he have been interested?

“I don’t know, man” he told us, pondering the question aloud. “I don’t know if you remember, my season was the Live season, season fifteen [the fights aired live week-to-week]. The show that they do now, all the other shows besides my particular season, they cram you into six weeks, which isn’t bad. When I did it, it was thirteen and it felt like prison.”

“Don’t get me wrong, we got to live in a five million dollar mansion, we got to do this, we got to do that” he continued. “But it was just, cameras following me everywhere, I had to ask to go to the bathroom if we were out, security guards had to walk me, I had no freedom. And we didn’t get paid nothing. That was a lot of time away from my family, it was my first time ever away from my family, I was the youngest person in the house at twenty-one. I would really have to think about it. It’s a lot of work smashed into six weeks.”

The UFC, however, is the past. Bellator MMA is Lawrence’s current home, and that once again puts him under Scott Coker, arguably one of MMA’s most popular promoters. Is there anything in particular that makes Coker’s promotions so appealing?

“He is a huge combat sports fan, and he really does a great job and has really turned around Bellator from where it was. Bellator now is doing big things, doing great things, and I’m very happy to be under Scott Coker” Lawrence told us. He then recounted the story of his first pro bout in Strikforce.

I remember when I fought on Strikefoce, and I knocked out Max Martyniouk and at that time, I was definitely the underdog, and at the time they were doing this fighter exchange. What that meant was that they got to do a camp, they got to pick three coaches, one was Pat Cummins, [he] was a fighter, Max Martyniouk was one guy, the coaches were Jason Mayhem Miller, he was a coach with Pat Cummins, and Fedor was Max’s. And at the time, Fedor was the man. Everyone was like, ‘Fedor is the God of MMA’ and still kind of is. So I was like super nervous and kind of scared a little bit, just because it’s my first pro fight and I’m fighting this high-profile guy who’s doing training camps with Fedor Emelianenko.

I went in there and I put hands on him, and I ended up knocking him out in the third round, and Coker was super pumped about me, and always had an eye on me. He really liked striking; I feel like strikers are the most exciting fighters in the game just because at any time they can end the fight. That’s what people want to see. Don’t get me wrong, wrestling wins fights, but strikers, they’ll sell the tickets. I was really pumped when Coker came to me, when I won that RFA title, defended it, he came to me, and offered me a good deal. I was more than happy and super pumped to get the deal done and be under him again.

That’s the kind of loyalty that matters in a world as small as high-level MMA really is. Thus far, Lawrence is 2-2 in his Bellator MMA career, and next up is Treston Thomison. No matter where the fight goes against Thomison on Friday, Lawrence is comfortable with it.

“I’ve been rolling for ten plus years, I am good everywhere, I’m a complete mixed martial artist” he said. “You have to be nowadays. You can’t be one dimensional. If you are one dimensional, you’ll get exposed fairly easy. I’m so comfortable down there, and I feel I am better everywhere than Treston Thomison. I think I’m the man, and I’m going to show him July 14.”

“I feel like once he feels the speed and the power power, he’s going to try to take me down, be grabbing at my ankles. I just gotta stay light on my feet and be ready for that stuff. I think my wrestling is very underrated, no one really knows about it because I don’t really use it” Lawrence explained further. “I want to strike, I want to be on my feet, it’s not rocket science.”

Knowing this, it makes things “not easy for me, but it makes it a little more [predictable] as to what he’s going to do.”

Lawrence has been working with Alliance MMA, which is a big asset in his development. “It has elevated my game” he said of the camp. “Eric Del Fierro is a really good coach, and he doesn’t baby you. I feel like a lot of these coaches kind of baby their fighters and let them dictate what they’re going to do in camp, and Eric doesn’t do that. Eric puts you in the worst position possible, and makes you fight out of it.”

“It really gives you confidence knowing that you kept it up with some of the best guys in the world” he said of the gym, which houses names like Phil Davis, Dominick Cruz, and others. Lawrence likes the tough pace, too. “I’m all about the tough love.”

That top-notch training will hopefully help Lawrence make a statement at Bellator 181, which he very much wants to do. “I’m here to stay, and I am dangerous, I’m so dangerous.” His last two losses came by way of the judge’s scorecards, something he’d like to avoid a repeat of.

“At the end of the day, judges will always make you cry, so I try to go for the finish.”

Justin “The American Kidd” Lawrence will be going for the finish Friday in Thackerville, Oklahoma at Bellator 181 when he takes on Treston Thomison. 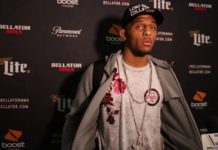 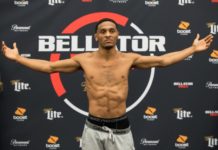 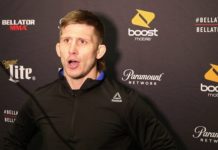