UFC 213 Romero vs. Whittaker took place this evening at T-Mobile Arena in Paradise, Nevada where Jordan Mein met Belal Muhammad in a three round contest to open the preliminary card on FOX Sports 1.

Canadian Jordan Mein entered the cage Saturday coming off a decision loss to Emil Weber Meek back in December of last year at UFC 206, in a fight that saw Mein return from retirement to face the Norwegian. At UFC 213 Mein entered the cage looking to get back on track with a win over Muhammad.

Since entering the UFC back in July of last year at UFC Fight Night: dos Anjos vs. Alvarez, Belal Muhammad has remained active, with Saturday marking the fifth time Belal has stepped into the UFC octagon. Having flip flopped wins and losses in his last four Muhammad was looking to build off his recent success from his UFC 208 decision win over Randy Brown.

The first round saw both fighters come out throwing legs kick until Mein shot in and was stuffed by Muhammad. Mein in return stuffed Muhammad’s own take down attempt. Mein went back to working the leg kicks and the damage was becoming visible. Muhammad drove Mein into the cage and landed a short elbow opening up Mein to end the round.

The second round started similar to the previous round with both fighters throwing leg kicks and Muhammad firing back with a high kick for good measure. Muhammad then drove Mein back into the cage and began working for the take down. He managed to get Mein to the ground, however Mein popped right back up. Muhammad was next pushing the stand up with Mein continuing to work the leg kicks. Mein shot for a take down and was stuffed by Muhammad. Mein was starting to look rather tired and Muhammad was able to drive him back into the cage again, capitalizing with a take down and quickly working his way into half guard. The round ended with Muhammad on top.

The third saw Muhammad open the action by driving Mein back into the cage, taking no time working in some short shots until Mein got a hold of his wrist, working for the Kimura and taking things to the ground. Both fighters scrambled with Muhammad taking Mein’s back and locking in the triangle, then trying for a choke. Mein worked loose and scrambled to his feet, going for the Kimura again. Muhammad got free of the hold but Mein had him against the cage as the round ended. It went to the scorecards, where the result was no surprise. 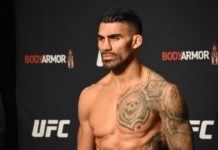 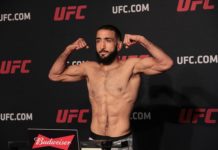