ONE Championship returned to action Friday, live from Thuwunna Indoor Stadium in Yangon, Myanmar with ONE Championship: Light of a Nation. In the main event, middleweight champion Vitaly Bigdash squared off against Aung La N Sang in a rematch of their fantastic fight from earlier this year.

This second fight promised to be interesting — last time out, Aung La N Sang took the bout on short notice. Though the fight went a full five rounds, Bigdash was pulling well ahead by the end. This time, most expected the action to be much closer.

Also on the card, a one night flyweight tournament, with the tournament final serving as the night’s co-main event. Not to mention Japan’s Mei Yamaguchi taking on Jenny Huang. Both atomweights were recent victims of star champion Angela Lee, and would like to work themselves back into the title mix.

The opening of the main card saw Kevin Chung secure the win with several vicious knee strikes to the head of the defending Zhong Qing Ya in the grounded side position. Just one bout later, Tha Pyay Nyo made short work of Htet Aung Oo, securing the knockout in just sixteen seconds.

In the Atom weight battle between Mei Yamaguchi and Jenny Huang a hard fought first round took us to the second frame that saw Yamaguchi lock in a rear naked choke for the win. That win puts Yamaguchi back into the title hunt.

After moving on to the the final round of the fly weight tournament, thanks to a first round finish, Saw Min Min made short work of Ye Thway Ne. He secured victory with a guillotine choke just 43 seconds into the first round.

The Final bout of the card saw both Vitaly Bigdash and Aung La N Sang trade shots and take down attempts. Aung La N Sang got off to a strong start in the first round after landing a pair of strong left hands staggering, then dropping Bigdash before following him to the mat. The second round saw Aung La N Sang continue to get the edge in the stand up for most of the round. Bigdash started to turn things around in the third when he shot in and secured the take down, and worked some ground and pound, however in the 4th a visibly tired Bigdash was not able to repeat his previous success as Aung La N Sang continued to pressure the champion in the stand up. The final round saw Bigdash find success again with the take down, putting Aung La N Sang on his back twice in the round. Unfortunately for Bigdash it was too little, too late and the decision along with the belt went to Aung La N Sang.

This fight will likely set the stage for a rubber match between them somewhere down the line.

Check back during the event for results and a recap of the main card! 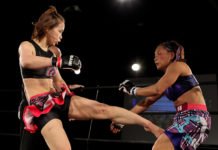 ONE Championship Announces More Bouts, Flyweight Tournament for Light of a Nation 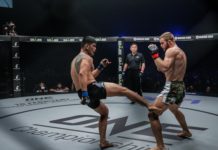