UFC Oklahoma City might have started a little slow, but after the debut of Dominick Reyes, and a stellar bout between Felice Herrig and Justine Kish, business was picking up. In the co-main event of UFC Fight Night 112, Johny Hendricks, he of welterweight championship fame, met Tim “The Barbarian” Boetsch.

Incredibly, after moving to middleweight due to issues making weight, Hendricks once again came in over the limit. Ergo, this bout wound up at a catchweight, with Hendricks being forced to forfeit a portion of his purse to his opponent. That certainly had fans online blowing up the UFCOKC hashtag.

Hendricks and Boetsch touched gloved, and we were underway. Boetsch was circling, into Hendricks’ right hand. Hendricks would try to get him moving the opposite direction with kicks, in order to line up a big left. Boetsch stayed active, mixing in some kicks. Boestsch then caught a Hendricks kick and tried to come over the top with an overhand. For the most part, Bigg Rigg was chasing his opponent early, while The Barbarian elected to counter. Hendricks looked to have a little pepper on some of his shots, swinging hard. Boetsch caught Hendricks with a right hand with a minute to go, but Hendricks was only slowed for a moment. Boestsch went body-head at the end of the first. Good round.

Boetsch opened with a body kick in the second, while Hendricks answered with a leg kick. Boetsch then connected with a head kick, and Hendricks was stunned! Boetsch swarmed, adding uppercut after uppercut, and Hendricks covered up, essentially unable to defend! The ref bailed him out, and Tim Boetsch earns the TKO victory. 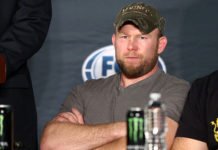 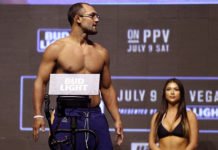 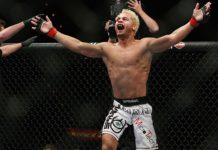