Bellator NYC went down Saturday night on PPV live from Madison Square Garden, and one of the most anticipated debuts was hot prospect Aaron Pico. Pico was set to face Zach Freeman, who would look to play spoiler.

The young wrestling talent, Pico, was 0-0 in MMA, and was jumping right into shark infested waters Satuday at Bellator’s big New York event. Those waters proved too deep, as right off the bell, Pico moved in on his opponent, only to be rocked by a huge uppercut. Freeman (8-2), who was supposed to be cannon fodder, proved to be anything but, following up that crushing blow by sinking in the d’arce choke as the youngster tried in vain to recover. Freeman managed to secure the choke in half guard, powering through it and earning the tap from the still-dazed Pico.

The sub turned out the be the fourth fastest in promotion history.

A perfectly placed uppercut, tenacious submission game, and Zach Freeman does what he promised and shocks the world! A quick outing after the five rounds of Davis vs. Bader 2 and Lima vs. Larkin.

“In this life, anything can happen, but you have to believe it” Freeman said after the bout. 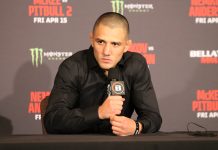