UFC Singapore took place Saturday live from Kallang, Singapore at the Singapore Indoor Stadium. Headlined by a bantamweight fight between former champ Holly Holm and Brazil’s Bethe Correia, it was an interesting card on paper that featured three former UFC champions, a former Pride champion, a former Strikeforce champion, and a lot of fighters seeking redemption. At UFC Fight Night 111, at least a couple of them found it.

One also picked up a Performance of the Night bonus for her work. The bonuses were announced immediately following the event at the UFC Singapore post-fight press conference.

In the main event, Holly Holm (11–3) overcame a slow, downright plodding start against Correia to absolutely crush the Brazilian with a head kick early in the third round. That kick came just moments after Correia had goaded “The Preacher’s Daughter” to come forward, and will be a highlight reel moment for years to come. For her efforts, Holm picks up a $50,000 Performance of the Night bonus.

The second Performance of the Night bonus was awarded to Japan’s Ulka Sasaki (20–4–2), who came back in the second round against Justin Scoggins, scoring a come-from-behind rear-naked choke victory.

Fight of the Night honors were awarded to China’s Li Jingliang (13-4) and newcomer Frank Camacho (20-5). Their back and forth fight saw both fighters rocked at times, but ultimately, “The Leech” Jingliang came out on top, picking up the unanimous decision victory.

While the loss in his UFC debut no doubt stings for Frank “The Crank” Camacho, the $50,000 should help take some of the edge off.

UFC Fight Night 111, also known as UFC Singapore, took place Saturday and aired live on UFC Fight Pass. Promotion officials announced attendance of 8,414 spectators for the event at the Singapore Indoor Stadium. The gate amounted to a total of $1,160,793 Singapore dollars, or roughly $839,307 in U.S. funds. 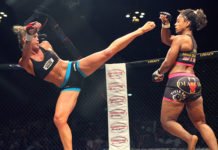 UFC Singapore: Where Does Holly Holm Go From Here? 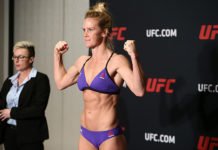 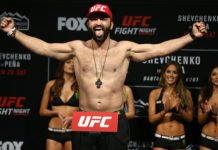