UFC strawweight Amanda Ribas (6-1), who was set to make her promotional debut at The Ultimate Fighter 25 finale, has been pulled from the TUF 25 finale card due to a potential anti-doping violation. The promotion announced the news in a statement released today.

Ribas had been scheduled to meet Juliana Lima (9-3) at the event, held July 7 at the T-Mobile Arena in Las Vegas. Instead, she’s likely to be on the sidelines for some time while this situation plays out.

The UFC statement reads in part that “The UFC organization was notified today that the U.S. Anti-Doping Agency (USADA) has informed Amanda Ribas of a potential Anti-Doping Policy violation stemming from an out-of-competition sample collected on June 7, 2017.”

The promotion went on to confirm that Ribas was off the card, and that they were seeking a replacement to face Lima.

It’s a tough break for a fighter who admitted recently that she cried upon receiving her UFC contract. The Brazilian, just twenty-three years old, has spent most of her professional MMA career with Jungle Fights and Pentagon Combat. She had recently been training with ATT.

As is standard with these sorts of announcements, neither the UFC nor USADA confirmed what substance Ribas tested positive for. 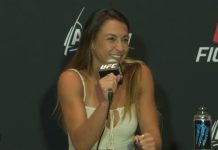