ONE Championship: Dynasty of Heroes took place Friday morning stateside, and featured one of the Asian promotion’s best cards to date, with “Unstoppable” Angela Lee defending her atomweight title against challenger Istela Nunes, and “Funky” Ben Askren putting his welterweight strap on the line against Agilan Thani. The card unfolded live at the Singapore Indoor Stadium in Kallang, Singapore.

Opening the main card, Singapore’s Amir Khan made short work of Rajinder Singh Meena, outclassing the Indian fighter on the feet. After softening up his opponent Khan scored a key takedown and was able to follow up with ground and pound, forcing his opponent to submit to strikes just under a minute and a half into the first round.

Two close rounds between Anatpong Bunrad and Geje Eustaquio spent mainly on the feet were followed by an exciting third frame, with both fighters managing to spend some time on top. With just over a minute to go in the third, Bunrad got the fight to the mat, but wound up eating elbows from the bottom from Eustaquio. Eustaquio managed to reverse and finish the round on top, a sequence that likely secured the third and final frame in his favor.

Going to the scorecards, the judges had it split, with two judges seeing it for Geje Eustaquio.

Dejdamrong Sor Amnuaysirichoke would give Dynasty of Heroes its next finish, utilizing his jab before finishing off Adrian Matheis by KO with about 30 seconds left in the first round. That was followed by a grappling match between former lightweight champ Shinya Aoki and American Garry Tonon. With a fifteen minute time limit, Aoki started strong early, taking Tonon down and working from the top while Tonon tried work on an inverted triangle from underneath.

Aoki utilized the cage well to take Tonon out of his element, taking him down repeatedly when he did make it back to the feet. Just over eleven minutes in, Aoki took the back and was able to lock in a body triangle. He wasn’t, however, able to secure a submission, and the two wound back up on their feet.

Minutes later, back on the canvas, Tonon began working on a leg lock, eventually securing a heel hook and getting the tap from Aoki.

Prior to welterweight champion Ben Askren making the walk to the cage in the co-main event, a potential number one contender’s bout went down between Zebaztian Kadestam of Sweden and Brazil’s Louis Santos. “Sapo” infamously saw his title fight against Ben Askren back in April 2015 end in a No Contest after an eye poke. Santos then missed weight for a rematch.

Despite being the favorite and up in the fight, Santos fell to the underdog Kadestam thanks to some crushing ground knees in a great come from behind win.

“Funky” Ben Askren went to work right away in his co-main event welterweight title defense against Agilan Thani. Taking the challenger down and securing side control less than a minute in, Askren began landing blows from above and briefly maintained a crucifix. Thani did manage to regain his feet, but was back down before long, and Askren sunk in an arm triangle choke, securing the win!

After the fight, Askren called out middleweight champion Vitaly Bigdash, but indicated he’d be open to fighting Zebaztian Kadestam failing that fight being booked.

In the main event, Angela Lee met some fierce striking from challenger Istela Nunes, who landed some sharp jabs and kicks on the champ. However, Lee would clinch and take the fight to the ground, working her way to her opponent’s back, and later attempting a twister submission.

While Nunes would escape the round, it was more of the same in the second. Nunes came out swinging, but was eventually dragged to the mat, with Lee locking in an anaconda choke. Nunes initially gave the thumbs up, but was forced to tap before long. Angela Lee successfully defends her atomweight title for the second time. 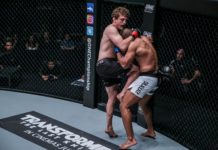 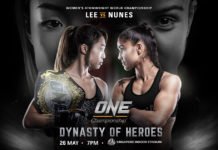