There is no fighter in all of mixed martial arts with such a positive and frankly infectious personality as Roxanne Modafferi. “The Happy Warrior” has been a trailblazer in MMA, launching her pro career while living abroad in Japan her junior year of University. It was a period where women had yet to break through in the sport. Pride was still king, and the Ultimate Fighter had yet to launch (many years later, Modafferi would appear on the 18th season of the show that changed the UFC’s fortunes).

Over the years, she’s fought some of the best in the world: Marloes Coenen, Sarah Kaufman, Rosi Sexton, and last September, Modafferi fought it a back-and-forth five round war for the Invicta FC flyweight championship against Jennifer Maia. She came out of that bout on the wrong end of a split decision, but with a smile on her face nonetheless.

That’s why she’s the Happy Warrior. Later this month, on May 20, Modafferi (20-13) has a tough match-up against Sarah D’Alelio, but it’s easy to see the Maia fight as a watershed moment for her career.

“I was really disappointed that I didn’t win, but I was very proud of my performance” she told Cageside Press. “I knew that I had improved since my last fight, and I was able to do a lot of the techniques that I’d been working on in training. That’s pretty much my motivation for fighting. I train so hard, I just really want to win by executing the techniques I’ve learned.”

Modafferi is a martial artist in the truest sense of the word. Does she feel like that fight was a defining moment? Well, maybe every fight defines you.

“I feel like every fight, I’m always one-upping myself.” And then, with that patented enthusiasm, Modafferi added “I landed my super attack, I landed my Roxy-coptor! Did you know I had a super attack?”

That’s the sort of statement that is quintessentially Roxy. She also let slip that she had another super attack coming: the Roxy-nado.

While she didn’t get the win against Maia at Invicta FC 19, she did bounce back nicely last month, submitting Priscila de Souza via arm-bar at a Fusion Fight League event. With that fight being so recent, Modafferi never really stopped training, which means she’s going full steam into her bout with D’Alelio later this month. With her cardio on point, what has she been working on? “Everything” in the end. Just don’t ask her to game plan. “I’m not a gamer planner, I leave that to my coaches.”

What does she need to do to win? Execute those moves she learned in training. The Happy Warrior knows this is a tough test: Sarah D’Alelio has been in the cage with Ronda Rousey, Julie Kedzie, and even holds a win over current UFC bantamweight champion Amanda Nunes.

One thing noticeably absent from this fight has been trash talking. A few nights back, Modafferi jumped on Reddit for an AMA, and pointed out that very fact. She noted that it’s rather hard to trash talk someone named The Happy Warrior. She’s not wrong, but that doesn’t mean Modafferi doesn’t understand why trash talking exists in MMA.

“MMA is fifty percent sport and fifty percent entertainment” she explained. “Of course you could debate those percentages.” Only, she’s probably not far off, in an era where name value gets you a better chance at a title shot than a winning streak. “Conor McGregor talked himself into a title fight” she pointed out. “Of course, he had skill too.”

Point being, Modafferi understands why the trash talk is there, it’s just not a route she’s going to go. “It’s just not who I am.”

While the Invicta flyweight is focused on her bout against D’Alelio, there was also the recent announcement that the UFC was poised to open a women’s flyweight division. That set off quite a buzz, and though the promotion initially claimed it was only in the planning stages, even before it was made official, it was clear to the Happy Warrior that it would happen.

Which is a very good thing. As Modafferi put it, “I’m just going to get out-muscled at 135, so I just had to keep fighting and wait for them to open the flyweight division, and just keep improving.” She’s excited to get another crack at the UFC, saying “so now it’s happening soon, I hope it happens sooner rather than later. I’m just excited, hopefully I’ll get the chance to make it to the super big time.”

The UFC is one thing, but what about The Ultimate Fighter? After all, she’s done it once before, so she knows more than most what being in the TUF house is like. In this case, the spoils are simply too good to pass up.

“I would rather get signed without having to do TUF again, but it’s for the championship of the UFC [women’s flyweight division], so my coach told me to do it” she said with a laugh.

Of course, there’s that the Invicta FC 23 fight on the 20th, which could make tryouts miserable. To which Modafferi added “not only that, but I have the possibility of being chosen for Jury duty in June. So I’m stressing out about that.”

On the next page, we talk about Bellator MMA, the state of mixed martial arts in Japan, and more! 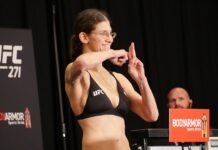