Bellator MMA was on the offensive today, scooping up talent in a weight class its competitor the UFC has thus far neglected. In a press release, the promotion announced that it has signed former UFC strawweight title challenger Valérie Létourneau (8-6), who parted ways with the UFC earlier this year. In addition, it has also inked deals with Alejandra Lara (6-1), Sabriye Şengül (Debut), Kristi Lopez (2-0), Na Liang (6-0) and Juliana Velasquez (5-0). All the aforementioned fighters will compete in the promotions 125lb (flyweight) division.

While Létourneau is obviously the biggest name of the bunch, Bellator’s flyweight division now looks stacked. The promotion already boasted a popular stable of 125lb female fighters including Ilima-Lei Macfarlane, Anastasia Yankova, Emily Ducote, Keri Melendez, Rebecca Ruth, and Lena Ovchynnikova. The signing of six additional fighters puts it neck and neck with (or arguably beyond) Invicta FC. The UFC, meanwhile, has failed to announce a sophomore flyweight fight following its one and only flirtation with the weight class — a bout between Létourneau and Joanne Calderwood at UFC Fight Night 89 in Ottawa back in June 2016.

Létourneau went on a three fight run upon joining the UFC in 2014, picking up wins over Elizabeth Phillips, Jessica Rakoczy, and Maryna Moroz. That streak earned her a crack at Joanna Jedrzejczyk’s title, which took place at UFC 193 in 2015. While Létourneau came up short, she performed admirably in a five round battle with the champ. However, two subsequent losses had her career in limbo, especially given flyweight, which the UFC lacked, seemed like a more natural home for her. She parted ways with the UFC earlier this year.

Alejandra Lara, who trains with Alexa Grasso of UFC fame, is an exciting prospect who boasts five finishes among her six career wins. China’s Na Liang, meanwhile, boasts a number of submissions on her professional record.

Bellator President Scott Coker is quoted in the press release, saying “We’re adding a proven title contender, along with a group of prospects from all around the globe, and we look forward to putting on great fights and displaying the talent this division has to offer.”

No details on when any of the newly signed fighters will premiere were announced. Létourneau, however, could be seen as a lock for a card alongside fellow countryman Rory MacDonald should the promotion make a return visit to Canada. Historically, Bellator MMA has made seven trips to the Great White North, all of them in Ontario. It has not returned to Canadian soil since 2014 however. 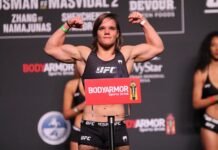 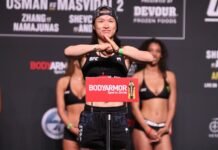 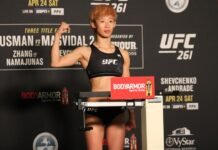 Welcome to the UFC: Na Liang