Calvin Kattar is going to Moscow, as his fight with Zabit Magomedsharipov has been moved from UFC Boston in October, to the promotion’s November return to Russia.

Calvin Kattar will not get to be the hometown hero against Zabit Magomedsharipov. The featherweight fight was originally scheduled for UFC Boston, at the TD Garden, right in Kattar’s back yard. However, multiple reports how now confirmed that the pairing is being moved to UFC Moscow, following an injury to Magomedsharipov.

That’s unfortunate news for Kattar, no doubt. The 31-year old Massachusetts native is coming off a career-defining win over Ricardo Lamas in his biggest fight to date. 4-1 in the UFC so far, he’s also on a two-fight win streak, and the fight with Magomedsharipov was yet another big test.

Now, it comes in enemy territory. Which is no small complication, given Zabit Magomedsharipov is one of the most dangerous fighters in the division.

‘ZaBeast’ is on a 13-fight win streak, and has not lost since 2013. He’s won all five of his UFC fights, winning three post-fight bonuses in the process. Not to mention being in the conversation for Submission of the Year, for his Suleov Stretch finish of Brandon David at UFC 228 last year.

In his last outing, Magomedsharipov defeated his toughest opponent yet, earning a unanimous decision against Jeremy Stephens.

Rob Font Excited for Opportunities for Return Fight From Injury, in “Best Division in the UFC” 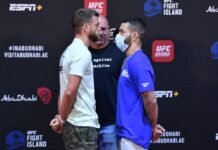